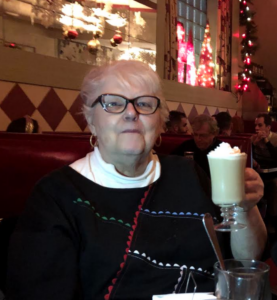 She was born in Racine Wisconsin in 1941 to James Speakman Clay Jr. and Elizabeth Paul.  Her father was a machinist by trade, and as Assistant Works Manufacturer for Massey-Harris, relocated his family to Batavia, New York to convert the tractor factory there to tank-manufacturing in the war effort.  James Jr., Elizabeth, Ruth, and Ruth’s older brother Jim, lived in Batavia until her father died, in 1944, of complications from ulcer surgery.  At that time, the family moved back to Racine. They lived first with her Grandma Paul, and then in a small, two-bedroom house her mother purchased.  Her mother worked as a social worker and sent her two children to college.  It was a happy day for Ruth when her brother left for Madison, and she was able to have her own bedroom, after sharing one with her mother.

Ruth graduated from University of Wisconsin Madison with a degree in social work.  She was a member of Alpha Xi Delta sorority.  Upon graduation she moved to Milwaukee and lived with two of her sorority sisters.  She had just started her masters in social work at University of Wisconsin Milwaukee, when she met John Andrew Stover, the love of her life, a sports reporter for the Milwaukee Journal.  There are two versions of how they met:  in one story they met in Estes Park in Milwaukee at some sort of mixer; in the other, Ruth’s roommate had gone on a date with John and had said to him, I think you should meet my roommate.  They were engaged within six months, and married six months later in June of 1965.

They settled in Shorewood, Wisconsin and had three children: Elizabeth “Beth” born 1966, Margaret “Margy” 1970, and John Jepsen “Jep” 1971.  A baby was miscarried between Beth and Margy.  They also had a beautiful rough collie named Jason.  This was the first of many pets that Ruth accommodated despite her druthers. While raising her children in Shorewood, Ruth earned income by starting a cottage industry making patchwork ornaments, wreaths, aprons, and table runners that she sold in local shops.  She also did alterations and sewed costumes for a local dance and theater company.  Her charity sewing began at this time too, as she made priest vestments and wall hangings for Holy Family Church.  She sewed almost all of Beth, Margy, and Jep’s clothes, and took tailoring classes and made a suit for John.  She reupholstered and refinished furniture, laid parkay flooring, wallpapered and painted, including racing stripes down the back hall.  She brewed crème de menthe and Kahlua and canned fruit. She tended her garden that was filled with peonies, a cherry tree, and lilacs.  During this time she was also the president of the Women’s Auxiliary of the Milwaukee Press Club, of which John was a member.

At John’s encouragement, Ruth agreed to take up camping.  The young family made many trips with the wood-paneled Ford LTD station wagon and pop-up camper, including to the Ozarks to see the Laura Ingalls Wilder home, Pennsylvania for the bicentennial, Colorado, and Mount Rushmore.  The family made many short trips to Wisconsin State Parks, where Ruth was once visited by a skunk who decided to enjoy the warmth of the fire beneath her chair.

In 1977, the family relocated to Palatine, Illinois, due to John’s new job.  Although she was a social worker by trade, she was not one by temperament.  She often said that had her father lived, he would have encouraged her to major in a business-related degree, as her strengths lay in management and organization.  Indeed, in 1978 she went “back to work,” first at the local Jo-Ann Fabrics, where she started as a clerk and rose to assistant manager of the store in Palatine.  Answering an ad in the newspaper, she was hired as a data entry clerk by Alden Press in Elk Grove Village in August 1980.  At this point, her climbing of the corporate ladder truly began. She stayed with Alden Press through its corporate buyouts, mergers, and name changes until she retired as Special Projects Manager from Quebecor World.  She managed the department that was responsible for labeling all catalogues and items the company printed, with software developers and computer programmers reporting to her.  She knew her way around a mainframe computer, even if she refused to have a smart phone and seemed disinterested in the tablet.  She retired on July 1, 2005 despite offers and incentives Quebecor proffered to get her to stay.  Her children were very proud of her career.

In her retirement, she traveled extensively, especially with her sister-in-law, Sophie Clay of Racine. In addition to garment sewing for herself, her children, and her grandchild, she took up quilting and charitable sewing.  She made an untold number of Linus quilts for children in hospitals and dog beds for local shelters.  She joined the Northwest Suburban Sewing Friends club, becoming its president in 2010, a position she held for almost three years.  She continued to reupholster furniture, she gardened, and she made cookies. She read or tried to read all the literary books that her children gave her, but eventually preferred the cooking and sewing mysteries that her granddaughter gave her.

Ruth was preceded in death by her beloved husband John Stover, her parents James S. and Elizabeth Clay, her brother James S. Clay III, her aunts and uncles Ruth and Ted Widmer and Margaret and Ace Lively, her parents-in-law Theodore and Selma Stover, and her brother-in-law Theodore Stover. She was also preceded by beloved pet dogs Jason, Auggie, and Licky; cats Ernie, Dino, and Yig; and countless guinea pigs.