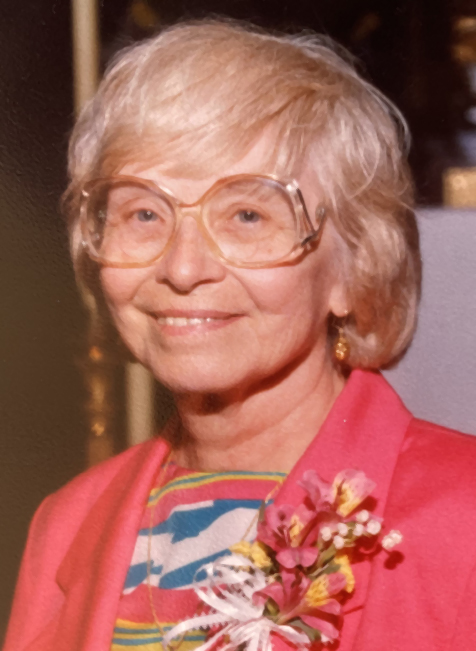 Those who knew life-long Des Plaines resident Mary Elizabeth (Kuhl) Le Comte said she was a sweet lady with a beautiful smile. But underneath that warmness was a woman who had more than her share of hardship and heartbreak. She overcame these challenges and ultimately had a long and fulfilling life. She passed away at age 96 at The Reserve at Arlington Heights on March 29, 2021, due to a stroke.

Mary, or Betty as she was called by family and friends long ago, was born September 8, 1924, the only surviving child of Alfred and Esther (Hedler) Kuhl. She was born on a farm on the northwest corner of Golf and Milwaukee roads that later became Ridgewood Cemetery. Her younger sister, Rosemary, died in infancy. Mary’s early life was influenced by the Great Depression, with stories like walking the Union Pacific railroad tracks near her home to pick up coal for heating. She never stopped being frugal yet she was generous, explaining that it was easier to spend on others than on herself.

Mary attended the original North School, the long-gone Des Plaines Junior High and Maine Township High (now Maine East, Class of 1942). Her first job was at Prince Castle on Lee Street in downtown Des Plaines where she worked as a counter girl starting at 20 cents an hour. Prince Castle developed the multi-mixer and hired Ray Kroc to sell them. Kroc went on to bigger and better things, as did Mary.

At Prince Castle she met George Le Comte, a soda jerk one year ahead of her at Maine, adding that she liked his car. Their romance was swift. Before long they were married and had son George Junior, then got caught up in the uncertainties of World War II. George enlisted with the U.S. Army Air Corps but when he was killed in action in 1944 Mary was crushed. At the age of 20, she was a widow with a two-year-old. George was her true love. She never remarried. The war and his loss affected the rest of her life.

Under a war services appointment, Mary got a job with the U.S. Treasury Department in 1942 with a starting salary of $1,440 a year, taking the train into Chicago to the Merchandise Mart. Later she transferred to the General Services Administration after it was created, working at both the old and current federal office building in the Loop. She was at the birth of computer technology, working her way up from sorting machine operator to data control technician and supervisor. She retired in 1971 after 29 years.

It was unusual for women to be in the workforce in the 1940s and 1950s but for Mary it wasn’t an option. She was a widow and single mother who also supported her parents as much as they supported her. At the age of 22 she bought a Sears Catalog home on Algonquin Road for the four of them that she owned for 71 years. As she saved money she bought other homes in the neighborhood as income properties, becoming a landlord when other women were homemakers. She completed her own income tax returns and made investments, tracking them weekly on ledger paper. In fact, she recorded everything, from gasoline to long-distance phone calls when those were still an extra charge. And she kept everything. Every closet, drawer, shelf, eaves, rafter and unoccupied corner was “packed to the gills” with “goodies” that she gleefully told her granddaughter would be hers to go through someday. Some of it was just plain junk but Mary would have debated that point.

Mary also had a fun side. She loved dancing at Chicago’s dance halls in the 1950s. She had the wardrobe, too. Her closet was jammed with fancy dresses and poodle skirts, strappy heels and sparkly clutches. But she had an earthier side as well, gardening in the backyard and keeping her birds and squirrels fed. In earlier days she read mysteries. Ellery Queen was her favorite. But after retirement Mary embraced television and cable completely. She had no less than five VCRs and a DVR humming — each with remote control — in order to record all her favorite shows which ranged from “The Young and the Restless” to “Star Trek” to anything on Animal Planet.

She exchanged emails with her grandchildren through her AOL account, printing and filing reams of them — we guess because she just liked to. She wore out several flip phones and abused our answering machines and voice mail with her long messages. She was smart, witty and congenial but not perfect. Sometimes she would talk or expect too much, and she was uncomfortable in formal situations — but she can be forgiven for not having time to read Emily Post.

Like her mother Mary was crafty, but unlike her mother she didn’t care for housekeeping. She made countless Li’l Missy bead kits and hooked rugs. Mary loved eating but not making meals. Chocolate was her favorite food group, buying silver-wrapped U-No bars by the case and never turning down a chocolate shake. In later years she raved about the homemade brownies her granddaughter-in-law sent. She was unassuming but not afraid to speak her mind. She frequently called into the Journal’s Speak Out! column to be sure you knew her opinion. Mary loved naps but she also liked visitors, especially her grandchildren and great-grandchildren who will miss her love in all the ways she showed and shared it. She is survived by daughter-in-law, Patricia Le Comte; granddaughter, Kathleen Le Comte (John Lupton); and great-grandchildren Lydia, Claudia and Audrey Lupton, all of Springfield, Illinois; and grandson, Michael (Katherine) Le Comte, and great-grandchildren Megan, Ashley and Matthew Le Comte, all of Pompano Beach, Florida. She was preceded in death by her parents; infant sister, Rosemary; husband, S/Sgt. George J. Le Comte; and son, George J. Le Comte Jr. Services will be private with interment at Rock Island National Cemetery, Rock Island, Illinois.