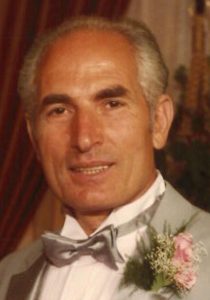 Services of Christian burial for Pietro (Peter) Argondizzo, 94, of Lake Zurich, Illinois and formerly of Chicago’s East Side, will be held privately on June 29, 2022, the Feast Day of Saints Peter and Paul.

Peter passed away peacefully at his home after a long illness on Thursday, June 23, 2022. He was the adored husband of the late Gemma (Candreva) Argondizzo for 64 years; devoted father of Rosemary (Anthony) Caparelli and Susan (Steven) Marshall; fun-loving Papa of Stephanie (husband, Zachary Jacobs) Caparelli, Christopher (Shelby) Caparelli, Nina (husband, Michael Murray) Marshall, and Gianna Marshall; Great Papa of Apollonia Jacobs, Porter Jacobs, Maximus Caparelli and Leonardo Caparelli. Papa will be lovingly remembered by his family for his devotion as a father, husband, father-in-law, grandfather, and great-grandfather.

Peter was born on March 1, 1928 in Mongrassano, Cosenza in the Province of Calabria in Italy. He was the son of the late Giuseppe and late Rosa (Licursi) Argondizzo. Peter and Gemma married on October 10, 1953. He proudly immigrated from Italy to America in May of 1954, sailing on the SS Andrea Doria and arriving at New York Harbor. Peter was proudly employed by Republic Steel as a Crane Operator for 30 years.

Peter was a wise and caring man with a big heart and a great sense of humor. He was a delightful storyteller, sharing an endless array of heartwarming stories of his life experiences.

He was self-taught—and incredibly talented— in plumbing, electrical, and carpentry. He was also a self-taught barber. He generously shared these talents with his neighbors, friends, and family.

When he retired, he dedicated his time to his grandchildren and gardening. He cherished his four grandchildren, playing dress-up, making endless trips to the library and— most importantly— teaching them life skills. He became an avid gardener, spending countless hours tending to his abundant vegetables, grafting his fruit trees, and harvesting his crop. Every Friday, Peter and Gemma made Italian bread, which he would proudly deliver to his children.

He kept in close contact with his siblings and, in his later years, he was able to visit them in Italy, Australia, and Canada. He never forgot his roots and generously shared his success by helping his parents and siblings throughout his life. He was very fond of his many nieces and nephews in the United States and abroad and was always happy to hear of their successes.